Which EA Review Course Is Right for You?

With my comparison of the most popular EA review courses, you can get the best course for you! 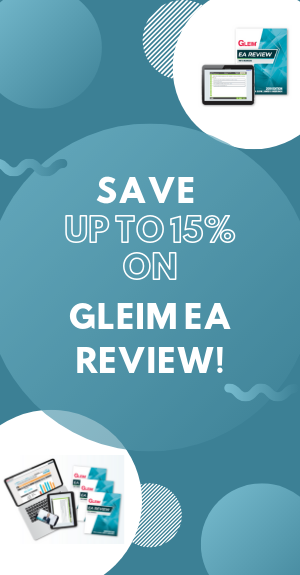 The Definition of an Enrolled Agent

What’s more, enrolled agents often fill the role of both tax accountant and tax attorney. In many cases, clients call upon the expertise of enrolled agents in complex tax situations where audits are likely. So, as the tax preparer, an enrolled agent is the most qualified to explain and defend the choices made during preparation.

So, how much do enrolled agents make? Well, according to Payscale, the national average salary for an enrolled agent is just over $50,000 when you factor in bonuses and commission. However, actual EA salaries may vary quite a bit when you consider all the variables. For example, your years of experience as a tax professional will help you earn more. The size of the company and the scope of your responsibilities also affect your earnings.

Additionally, because enrolled agents are federally designated, they can work in any state in the country. And, with the increased convenience and reliability of telecommuting technology, a small firm can serve clients nationwide. For example, a small enrolled agent-run firm in rural Nevada could expertly serve clients in New York, California, or Alabama. Therefore, the ability to expand your client base beyond state borders is an advantage enrolled agents have over CPAs.

On average, CPAs do make more money (closer to $70,000 annually) than enrolled agents. But in the long term, corporate salary caps and geographical constraints often limit CPAs salaries. So, an enrolled agent in the right region who builds up a great interstate reputation and client base can certainly out-earn CPAs in the same area. Therefore, because the CPA is a state certification, not a federal one, a CPA may want to earn an enrolled agent designation as well to expand her credentials and her earning potential.

The average enrolled agent salary of $50,000 varies by region. Therefore, you should compare the average EA salaries across the United States to better understand how much you can make as an EA.

In New York City, the average salary for an enrolled agent is on par with the national average. On the other hand, the actual range is between $31,000 to $102,000. Consequently, the EA salary can vary greatly in the Big Apple. Additionally, a cursory glance at Boston EA jobs on Indeed reveals salaries ranging anywhere from $60,000 to $130,000. Elsewhere in the region, such as Baltimore, the majority of the enrolled agent positions pay between $45,000 and $100,000 per year.

According to Indeed.com, over half of the enrolled agent jobs in Atlanta pay more than 6 figures. The rest fall somewhere between $50,000 and $100,000. However, you’ll find fewer EA jobs in Memphis. Therefore, the EA salary range in that city is significantly higher, starting at over $80,000. Enrolled agents in Charlotte also earn higher than the national average. Their salaries come in somewhere between $75,000 and $100,000.

Chicago’s median salary for enrolled agents is actually lower than that of the rest of the country, according to Payscale’s data. However, similar to other regions, the range itself is broad. Current job postings in Chicago reveal an EA salary range from around $55,000 per year to over 6 figures. What’s more, the median pay for enrolled agents in Denver is in line with the U.S. median at just over $50,000. Yet, in the mile-high city, over half of the EA salary figures posted are above $112,000 annually. And while they say everything’s bigger in Texas, this statement doesn’t necessarily hold true for Dallas enrolled agent salaries. The median there is just over $41,000. But jobs posted in the area pay between $65,000 to over $130,000 annually.

In the Pacific Northwest, where tech and trees reign, Seattle enrolled agents earn anywhere from $45,000 to over $125,000. And enrolled agents in Portland can earn around the same. However, San Francisco residents in enrolled agent positions earn a median income of $65,000, which is well above the national number. Of jobs posted in the city by the bay, nearly half pay above $125,000 annually. Moving down to Southern California reveals EA salary numbers that are as sunny as the beaches. Enrolled agent salary numbers in Los Angeles show that about half of the jobs available pay in the six-figure range. And finally, salary numbers for enrolled agent jobs in San Diego range from $80,000 to over $100,000.

One reason enrolled agent salaries across America are so widespread is because enrolled agents can hold various positions. Your education and experience level as well as any other certifications you hold also affect the size of your enrolled agent salary. And another factor that makes a significant difference is the type of employer for whom you choose to work.

Working as an enrolled agent at one of the larger national tax firms won’t necessarily earn you as much as you might make at a more specialized regional or local brokerage. The big chains pay their more experienced enrolled agents between $20 and $30 per hour on average, which comes to between $40,000 and $50,000 annually. However, jobs posted for smaller regional agencies tend to pay higher. For instance, the range for some posted jobs in these types of companies is between $60,000 and $85,000.

Of course, the more experience you have, the more an employer will be willing to pay you. Consequently, entry-level positions start on the low end of these ranges, while senior positions claim the highest salaries. For example, in Phoenix, a senior tax consultant with an enrolled agent designation and over 5 years of relevant experience can earn over 6 figures at a regional firm.

And, if you decide to work for a non-finance-related company as an enrolled agent, you can actually expect to earn a bit more. Typical salaries for accounting agencies were around the $50,000 mark. On the other hand, accounting jobs for enrolled agents at top corporations like Apple, Starbucks, FedEx, and GE typically pay between $60,000 to $80,000 per year.

Self-employed enrolled agents who operate their own accounting agencies can expect more earnings than their counterparts at large brokerages and corporations. At a median of $58,000, the salary for an independent enrolled agent is not bad. Furthermore, when you consider the lack of an upper limit on your earning potential, the idea of self-employment becomes very attractive. In the right area, and with the right book of business, an enrolled agent can do quite well working in self-employment. Best of all, you can set your own schedule, work across the United States, and take on as many clients as you can keep.

The IRS designates EAs, but because they represent taxpayers before the IRS, enrolled agents cannot work there. In most cases, enrolled agents compete with other tax professionals. Many EAs chose to work for large agencies, accounting or otherwise. However, some prefer to work for only one client or for a corporation or a smaller business. Still, others decide to open practices of their own. As you’ll see, each employment option for enrolled agents has its pros and cons.

As of 2016, 42,000 accounting firms existed in the United States. While that number is large, most of those firms are small agencies that handle relatively few clients compared to the big competition. The largest firms in the country pull in billions of dollars in revenue annually and employ tens of thousands of people. On the other hand, the smallest successful brokers and agents typically see less than a million dollars come through their doors each year. And, these organizations only employ about 5 or fewer people.

In addition to traditional accountants, a lot of mid-sized to large corporations benefit from hiring a full-time enrolled agent. Similar to having a corporate attorney, having an enrolled agent on staff helps many companies stay on top of their complex tax issues. For instance, corporations rely on enrolled agents to advise them on policy, prepare taxes, and represent them in audits and other proceedings before the IRS.

If you’re planning to start your own book of business, then earning the enrolled agent designation is a great way to differentiate yourself from the bulk of your competitors. As an enrolled agent, you can provide services to your clients that other CPAs, bookkeepers, and finance professionals can’t.

For example, many small to mid-sized businesses prefer to outsource their accounting. So, having one person serve as both their tax preparer and their tax attorney appeals to these clients quite a lot. Additionally, clients often prefer to work with a single individual or a small team for the sake of efficiency. Therefore, as with the lion’s share of the small accounting agencies out there, specialization is key. Consequently, building a reputation as the tax expert in town (and the tax law expert) can really help your career.

Of course, having your own agency also removes any limitations on your salary. Whereas, working for another firm adds these limitations back.

The Process of Becoming an Enrolled Agent

In order to become an enrolled agent, you must satisfy the EA requirements of Treasury Department Circular 230.  This document explains that you can obtain an Enrolled Agent designation in 1 of 2 ways. The first is by passing the Special Enrollment Examination (SEE), which has 3 parts.

The other way to become an enrolled agent is by having enough IRS experience. According to the Treasury Department guidelines, you must have at least 5 years of active, continuous service in order to become an EA.

Yet, both paths to the EA also involve extensive background investigations. And, in addition to the standard background check, the IRS also investigates your personal tax history.

Because enrolled agents have authority to represent clients before the IRS, they can fulfill a more specialized niche than non-enrolled tax preparers and accountants. Therefore, while CPAs do earn more on average than enrolled agents in the short run, the potential for earnings over the span of a career can be higher for enrolled agents.

What’s more, when an enrolled agent runs a small agency or brokerage that offers complete, specialized tax solutions for its clients, she can expand her earning potential even more. And, enrolled agent salaries are on the rise at larger firms and corporations, too. So, if you’re just starting out as an enrolled agent, you can expect to make somewhere between $30,000 and $40,000 annually. But after a few years, you should see your salary to increase. And, making 6 figures isn’t out of the question.

If you don’t currently have the IRS experience to become an enrolled agent, you’ll need to pass the EA exam. The EA exam was designed to produce only the most qualified and competent enrolled agents. Consequently, the EA exam is not easy. But fortunately, you can prepare to pass by utilizing an EA review course. And with affordable pricing, this investment in your future definitely pays off. So, use our comparisons of the best EA review courses to find the right EA course for you, and use our EA discounts to save on your preferred exam prep.

And take advantage of free help for embarking on the EA journey and passing the EA exam by taking our free EA e-course. Learn more or sign up below!

About the Author Stephanie

I am the author of How to Pass The CPA Exam (published by Wiley) and the publisher of this and several accounting professional exam prep sites.

Gleim EA vs Surgent EA Exam Review: Which is better for Enrolled Agents?

How Many Enrolled Agents Are There?